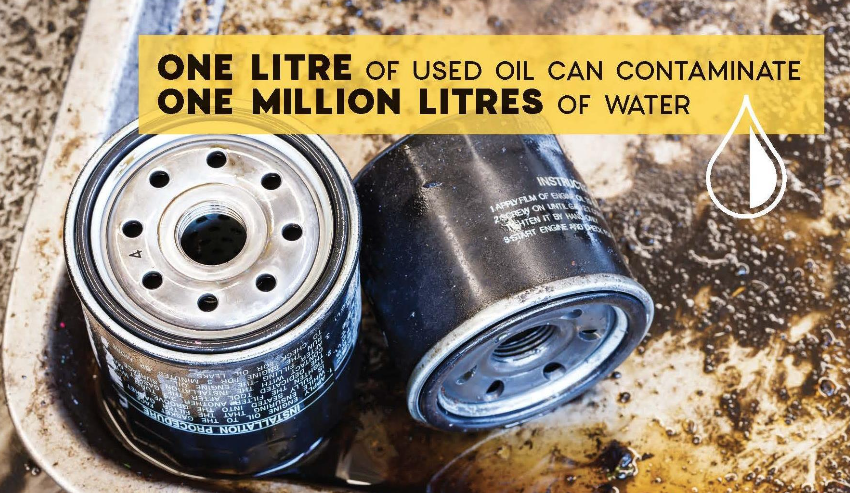 Generators of used oil, and waste in general, are required by law under the Waste Act to ensure that their waste is responsibly managed.

Those who generate more than 20kg’s of hazardous waste per day are also required to register on the National Waste Information System (SAWIS) and to report on the volumes generated and taken away for recycling. Those who fail to comply with the rules and regulations set out by the current legislation also face penalties such as fines or even jail time.

It has therefore become the legal obligation of South African businesses that generate waste such as used oil to ensure it is responsibly collected and taken away to a registered facility for processing and recycling.

Coupled with this is the fact that used oil is a hazardous substance – with one litre being capable of contaminating a million litres of water – and so generators also face a moral responsibility to ensure their used oil does not end up in the environment.

Used oil in the automotive sector

With nearly 11 million vehicles on the road in South Africa currently (10 867,578 according to latest eNatis statistics) and over 3000 registered workshops, not to mention the unregistered and back-yard mechanics servicing the majority of these vehicles, there is a huge volume of used oil being generated in the automotive sector.

Bubele Nyiba, CEO of the ROSE (Recycling Oil Saves The Environment) Foundation says that whilst the mayor workshops are compliant with the requirement of the Waste Act, the problem exists in the pricing structure for used oil.

“Currently in South Africa we have a system in place whereby the used oil collectors purchase the used oil from the generators. This model – which was pro-actively adopted many years before legislation governing the responsible recycling of waste, and the pricing of waste, was introduced – has been successful up until now as it has given value to used oil as a waste, thereby incentivising its responsible collection. However, we are now seeing a situation where used oil generators in South Africa are regarding their used oil as an income generating product and this has driven the price of this waste up to unsustainable levels.”

Nyiba explains that best practise in other developed countries sees the used oil generators paying the collectors to take away their waste, as opposed to the current South African model which is the other way around. Nyiba further ponders whether South Africa will follow international standards in this regard as it has in many others.

“Our concern is that pricing used oil to the point that it becomes a commodity will make it unsustainable for most used oil collectors in South Africa to continue to operate. The fewer used oil collectors out there, the less oil collected – meaning a much larger volume is left to possibly make its way into our environment through irresponsible disposal,” cautions Nyiba.

“The ROSE Foundation has set increased used oil collections as a priority in SA going forward and we do not want to see the current volumes dwindling due to unsustainable business models driving out industry players.”

Nyiba goes on to urge used oil generators to use a ROSE registered used oil collector when having their used oil removed. This will ensure that the collection, transportation, storage and re-refining of used oil is managed in a sustainable, ethical and responsible manner that is compliant with all current legislation.

“In addition, we would like to see workshops becoming the place where the public can drop off their small volumes of oil from self-servicing of vehicles. There is a workshop in every town in South Africa and this means that we would not need to invest in additional facilities for the public to drop off their used motor oil. The workshops should be ambassadors of used oil collection.”

“Finally, the ROSE Foundation and workshops need to work closely together to correctly channel the direction of used lubricating oil. We are encouraged by our ongoing discussions and interactions with the Retail Motor Industry Organisation (RMI) to forge together a common approach to managing used oil. Our combined efforts should leave a lasting legacy on avoiding the harmful effects of used oil to our environment,” concludes Nyiba.

For more information and to find out about a registered NORA collector contact the ROSE Foundation on (021) 448 7492 or visit www.rosefoundation.org.za.

We use cookies on our website to give you the most relevant experience by remembering your preferences and repeat visits. By clicking “Accept All”, you consent to the use of ALL the cookies. However, you may visit "Cookie Settings" to provide a controlled consent.
Cookie SettingsAccept All
Manage consent

This website uses cookies to improve your experience while you navigate through the website. Out of these, the cookies that are categorized as necessary are stored on your browser as they are essential for the working of basic functionalities of the website. We also use third-party cookies that help us analyze and understand how you use this website. These cookies will be stored in your browser only with your consent. You also have the option to opt-out of these cookies. But opting out of some of these cookies may affect your browsing experience.
Necessary Always Enabled
Necessary cookies are absolutely essential for the website to function properly. These cookies ensure basic functionalities and security features of the website, anonymously.
Functional
Functional cookies help to perform certain functionalities like sharing the content of the website on social media platforms, collect feedbacks, and other third-party features.
Performance
Performance cookies are used to understand and analyze the key performance indexes of the website which helps in delivering a better user experience for the visitors.
Analytics
Analytical cookies are used to understand how visitors interact with the website. These cookies help provide information on metrics the number of visitors, bounce rate, traffic source, etc.
Advertisement
Advertisement cookies are used to provide visitors with relevant ads and marketing campaigns. These cookies track visitors across websites and collect information to provide customized ads.
Others
Other uncategorized cookies are those that are being analyzed and have not been classified into a category as yet.
SAVE & ACCEPT